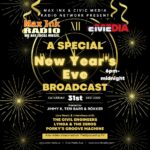 The people of Earth are once again about to partake in their traditional celebration of some arbitrary point in space around their Class G star System. We aboard the Spaceship find this quaint when we get the chance to observe these rituals in the wild. Every so often we come upon primitive planets that have figured out the mathematics for accurately calculating planetary spin and solar rotations into “days” and “years”. Earths is quite simple really; you should consider your species lucky to live out where large galactic developments have not yet reached technological oversaturation and cosmic overconsumption.

The notion of days and years do not exist where we are from. Though they are something we tend to learn about early on in our stage 2 developmental studies. We learned that solar systems way out in galactic arms, far from their centers, tend to develop more stable gravitational planes. This can lead to lifeforms being less suitable for deep space travel without great technological assistance from visiting species. Life out in the starburbs and beyond into what you might refer to as the galactic “back woods” (Earth is really far out there) definitely have less chaotic evolutionary tales.

Life in the inner galactic solar systems can be far less forgiving. More hustle and bustle than life out in the arms. For instance, our binary star system has seen much upheaval through both natural and interspecies conflicts, that have vastly altered the gravitational forces governing many planets within. Light from multiple points in space shining on complex rotations not set into disc-like planes makes the concept of a day very difficult to pinpoint. Add in the constant changes to gravitational forces through planets getting destroyed, and the famed gravitational experiments that forever altered our course through space, you might start to see how time can not be calculated based on simple planetary rotations alone.

Making things even more difficult is the need for constant interplanetary migration when it appears your planet might be doomed all over again. Some planets are more open than others in accepting new inhabitants from other worlds when needed. This makes the need to be constantly searching for emergency backup planets very important for those species equipped for such an event. So, when we do get to see a planet like Earth celebrating a full rotation around their star, it brings about a sort of nostalgia for when we had to study about it. You are not subjected to seeking out new worlds, at least not yet. You get to live relatively peacefully in the blissful wonders of your galactic arms until the inner systems expand outwards encroaching on your ways of life. We want to make the most of it with you while we still can.

The Spaceship would like to assist the humans once again in their quaint celebrations by partnering up with quite the force in local live music. We are pleased to welcome aboard, Max Ink Radio and their rowdy crew. Jimmy K, Teri Barr and Rokker himself will take over the spaceship to host their regular radio show both live on video here on our website, in addition to audio broadcasts to Civic Media’s Radio Network of AM/FM Stations across Wisconsin. Also streaming on the Civic Media App and website. There will be interviews and live performances by The Civil Engineers, Lynda & the Zeros, and Porky’s Groove Machine, as well as all the traditional fun of the radio show but with video!! Best part about this event is that it is free to all on all platforms!! So come help us help you ring in your new year in style by tuning in on your medium of choice.

The humans we have gathered here at the spaceship also seem to like it when you tip your art tenders. Please partake in doing so by going to paypal.com/paypalme/TheSpaceshiptv Your earthly trinkets help these humans from being cast out into the dredges of your society. While we can certainly appreciate the cultural offerings your planet produces, there is still all that war stuff you need to figure out. Bad look overall for humanity, make us proud by assisting your fellow humans.

This event will surely be one for the galactic history books, unlike that one event we had once where the multidimensional federation appeared and took the entre planet to space prison. What was that planets name again.. ah no matter they’re long gone now. This celestial event and the next one on Draxia III are the two best events we’ve seen yet. And no we do not just say that to every planet we visit… really we don’t.

For more information on this event please visit the following links: